Each week HuffPost Queer Voices, in a partnership with blogger Scout, LGBT HealthLink and researcher Susana Fajardo, brings you a round up of some of the biggest LGBT wellness stories from the past seven days. For more LGBT Wellness, visit our page dedicated to the topic here. 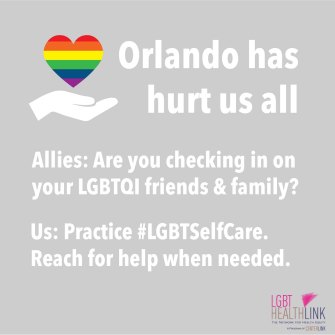 As all of us stay glued to the horrific news about Orlando, leaders have spoken uppointing out how this event will trigger past trauma for many of us. They urge #LGBTselfcare, ask providers to publicly display if they are LGBT welcoming, and suggest allies check in on their LGBT loved ones.

A study of queer women and trans men found that those who routinely got cervical cancer screenings reported being more comfortable with and “out” to health care providers, while those who did not reported more discrimination related to their sexual identity and gender expression.

Closets and Condoms and Black Men

A recent study of young Black men who have sex with men (MSM) in Mississippi found that men who disclosed their orientation to friends and family were motivated to use condoms as a means of resisting stigma and homophobia, whereas closeted men were more likely to internalize homophobic norms and less likely to use condoms, as well as be at risk of intimate partner violence.

Norway passed a bill introduced by the country’s Ministry of Health allowing transgender Norwegians to change their legal gender by merely completing a form, ending requirements for psychiatric diagnosis or surgery.

The Department of Veterans Affairs proposed a rule that would end its ban on paying for or performing gender-confirmation surgeries.