We are deeply saddened to report that Bill Busse, a Tips From Former Smokers ad participant, has passed away. The cause of death was heart disease, which is very common for smokers. Bill shared his story on the Tips From Former Smokers Campaign about the affects that smoking had on his health (made more severe by diabetes, which he had since childhood).

The CDC released a statement from Tim McAfee, Director, CDC’s Office on Smoking and Health on the passing of Bill Busse. The CDC asks that you please direct any questions and/or condolences to TobaccoMediaCampaign@cdc.gov. The CDC will make sure that your correspondence is forwarded to Bill’s family.

Bill’s health problems didn’t stop him from heroically coming forward towarn other smokers of some of the dangers they faced if they don’t quit smoking.  Nor did his health problems stop Bill from enjoying time with his kids.

Our thoughts and prayers go out to Bill’s wife, two children and two step-children, as well as his parents and his sister.

A tip for smokers, from the man himself; “Make a list and put the people you love at the top, put down your eyes your legs your kidneys and your heart, now cross off all the things you’re okay with losing, because you’d rather smoke.”

CDC’s Office on Smoking and Health seeks ex-smokers
to be in Tips From Former Smokers campaign!
The Centers for Disease Control and Prevention’s (CDC) Office on Smoking and Health are recruiting additional candidates to be considered for an upcoming national education campaign, Tips From Former Smokers (Tips). This campaign is similar to previous campaigns seen here, real people who have had life-changing, smoking-related health problems will be featured. They are conducting a national search to find people with compelling stories who are willing to participate in their campaign.

The CDC and OSH are seeking people from all backgrounds, and are particularly looking for candidates who are of Asian descent. All applicants must be tobacco-free for at least 6 months.

They are looking for ex-smokers who:

·         Have or have had colorectal cancer that was linked to cigarette smoking (ages 30–65).
·         Have or have had macular degeneration that was linked to cigarette smoking (ages 40–65).
·         Used cigars with cigarettes or used cigarillos or little cigars with or without cigarettes, thinking cigars, cigarillos and little cigars were healthier than cigarettes and developed a serious health condition while smoking (ages 20-60).
·         Used e-cigarettes or smokeless tobacco for at least a year while continuing to smoke some cigarettes; and
·         Thought using e-cigarettes or smokeless tobacco to cut back on some cigarettes would be good for your health; and
·         Despite cutting back, you were later diagnosed with a serious health condition.
All individuals should be comfortable sharing their story publicly and be able to articulate how their smoking-related condition has changed their life. The association between smoking and their condition must be clear, and candidates’ physicians will be contacted to verify that smoking contributed to the condition.

The CDC and OSH would like for you to help distribute this flyer (below). Please feel free to email it to anyone who might be willing to help CDC recruit for this campaign. The flyer can be posted in public areas or shared with anyone who may know people who fit the criteria above.

If you have questions, please send them to the CDC representative, Crystal Bruce, jgx6@cdc.gov.
Please put “Recruitment Question” in the subject line.

This sad news came today from the CDC’s Office of Smoking and Health:

We are deeply saddened to announce the passing of Terrie Hall – a true American hero. Terrie appeared in ads run by CDC for the Tips From Former Smokers media campaign, which encouraged several  million smokers to try to quit. Terrie died on September 16th from the effects of the cancer caused by the cigarette smoking she began in high school. Treating her cancer required multiple surgeries over the years, including the loss of her voice box, leaving a hole in her throat.  This summer the cancer spread to her brain, and despite radiation and surgery, the cancer spread further.

Terrie wanted to save people from having to go through the sickness and surgeries she endured.  She decided to let smokers and young people see her disfigurement and know what caused it, so that they would stop smoking – or better still, never start.  She spoke at schools and before other small groups. But the Tips from Former Smokers campaign gave Terrie her biggest platform.  More than a hundred million Americans saw her ads on television, the Internet, in magazines, on billboards and at bus stops — and many of them decided to try to quit smoking.  Strangers came up to her in drugstores and hugged her to thank her for inspiring them to quit.  By her willingness to show and tell people what cigarette smoking had done to her, Terrie saved thousands of American lives.

I had the occasion to meet Terrie recently as she was getting a medal of commendation from the Surgeon General for her leadership in smoking cessation. Of every ad CDC has ever run, Terrie’s was the most compelling story, and we all knew how many people she affected with her famous lines “If you’re going to smoke, take a video of yourself so your grandchildren can see you before you sound like this.” Terrie made it her mission to show the reality of smoking’s impact, and she saved many lives in doing so. Deep bow to you our friend, you will not be forgotten, farewell & godspeed. 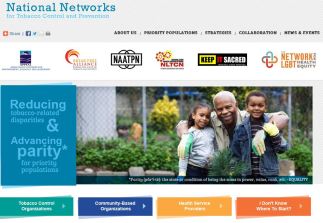 The Network for LGBT Health Equity is one of six national Networks working to reduce tobacco-related disparities in priority populations.

APPEAL, Break Free Alliance, NAATPN, NLTCN, Keep it Sacred and (yours truly) the Network for LGBT Health Equity, represent populations that have higher rates of tobacco use and tobacco related illness. Under the umbrella of the Center for Disease Control,  these Networks identify, explain, address, and reduce these disparities.

With the recent roll-out of the second phase of the CDC’s Tips From Former Smokers Campaign, the National Networks wanted to highlight tips from members of our communities who have quit as well!

Seven fabulous LGBT people volunteered their stories and tips for quitting! You can see them all on the National Network’s site!

Here’s a sneak peek at some of the tips. Click on the name to read their whole story:

“Set achievable goals for yourself and reward yourself when you reach them. Make it a positive experience for yourself!”

“Find a quitting buddy– if there are two or more of you trying to quit, then you can motivate each other.”

“I publicly announced that I quit smoking (on Facebook), so that I would have to be held accountable.”

“A medical professional told me it was not a matter of “if”, but “when” I would get emphysema. I chose a quit date and ended my addiction soon after.”

“Reach out for support — I found it helpful to share in my journey on Facebook and use the positive feedback of friends and family for encouragement and motivation to keep going.”

“Know you are worth the effort and can achieve freedom from the tobacco dependence.” – Stuart

“I had to accept that I could never be a social smoker again.”

Exciting news! You know the CDC’s Tips from Former Smoker’s campaign? Well, in honor of pride month (whooooo!), the CDC has come out with a very cool graphic specifically targeted to the LGBT community:

When the CDC first reported out to the tobacco disparity networks (we are one of these!) on their historic $40M tobacco control ad campaign, they didn’t mention anything about tailored media. As most of you know, LGBT smoking rates are through the roof, and most disparity populations also have disproportionate rates around tobacco: For example, Black/African-Americans have higher mortality rates, Asians are more likely to smoke the more acculturated to U.S. they get, Latinos have access to care problems that magnify the impact, and on, and on. The idea that the CDC wouldn’t use tailored ads in their never-before, humongous ad campaign was baffling… tailored marketing is how the tobacco industry built these disparities in the first place.

We urged them to include tailored media for all, including LGBT (We also urged them to buy ads in the LGBT blogs, which we hope might still roll out more in year 2).

Well, we’re happy to say not only have they done a few buys in LGBT media, but they’ve also rolled out this fabulous social media tailored ad! You can also check it out on the CDC tobacco free facebook page and on twitter at @CDCTobaccoFree!

For more information and stats on smoking in the LGBT community, click HERE.