The Network for LGBT Health Equity
Keepin’ you in the loop!
Passing on the good news!

With the end of open enrollment only a few days away, Vice President Joe Biden and Secretary of Health Kathleen Sebelius hosted a call yesterday thanking LGBT community centers, health centers, and organizations for their work in getting LGBT communities enrolled in the health insurance marketplace. Both spoke about the parallels between equal rights for LGBT people and equal access to healthcare, and about the significance and importance of the Affordable Care Act.

Sebelius started off the call by reviewing the health disparities in LGBT Communities, including the higher rates of cancer and tobacco use. Biden described the initial website issues as a “tough start”, but went on to credit Sebelius with the fact that “things are now moving!” He gave a few shout-outs to Out2Enroll and the Lesbian Health Initiative, among others, and emphasized two really important points: 1. Legally married same-sex couples can now get healthcare coverage, even if same-sex marriage is not recognized in their home state. 2. NOTHING about enrolling can affect immigration status AT ALL.

Biden described access to health insurance as being about responsibility, peace of mind and security, and choice, opportunity and freedom- Taking responsibility for yourself and your health, having peace of mind (and he said that for the young folks who aren’t worried about their health, do it for peace of mind of your mothers and fathers!), and the choice, opportunity and freedom to not be stuck in dead-end jobs because of insurance, and to not have to worry that if you move to another state you will lose your insurance.

Biden closed the call by saying that the ACA is one of the “seminal changes in American policy” and encouraging a huge push of the last few days of open enrollment- either online, over the phone or in-person!

– enroll in person by going to local help.healthcare.gov and finding a navigator at your local community center, health center or library!

“Healthcare is a RIGHT. The debate is over.” – Joe Biden

“Thanks to the Affordable Care Act, it really is a new day”. – Kathleen Sebelius

Dr. Scout, Ph.D.
Director of CenterLink’s Network for LGBT Health Equity
As published on Huffington Post’s new LGBT Wellness blog, see original at: http://www.huffingtonpost.com/scout-phd/hhs-secretary-sebelius-me_b_4899306.html?utm_hp_ref=lgbt-wellness
Earlier I asked you what you wanted me to say in the annual meeting with HHS Secretary Sebelius, now I’m back to report out on the meeting itself. This annual meeting with Secretary Sebelius is the chance for LGBT leadership to understand what’s top on HHS’s priority list and for them to hear what’s top on ours.

Our work for this meeting started beforehand as the National Gay and Lesbian Task Force folk stepped in to organize a call between the different community participants. My first impression was while the number of attendees grows each year this year it took a larger jump. There were reps from most every major LGBT group in the country and many HIV groups now too, like GMHC. This alone is a nice comment on change, because when I started going to these meetings years ago, many of these groups wouldn’t have had anyone expert enough on health to attend. I love the increased emphasis on health among our community organizations.

When we got to the meeting itself my first impression was the exact same — there were a lot more feds in the room than ever before. This meeting literally started years ago as about 12 people, now there were 40 community reps around the table, and nearly as many feds ringed around the sidelines. National Institutes of Health alone had three reps in the room, including the man trying to hire more LGBT staff and their main LGBT liaison. Gautam Raghavan, the White House LGBT liaison, was also there to bring our top issues back to White House strategists. This meeting is always packed with feedback from us, much of it aimed at specific HHS agencies, so I really appreciated seeing the agency staff there in person.

Then it was time for Sebelius debut, while this is our meeting with her, she’s only there for the first 15 minutes to give us top line info. What were her top line LGBT foci in the last year? 1. Access to health care and 2. Equal rights under the law, especially related to the Windsor/DOMA ruling. HHS had already taken action on several equal rights fronts pre-Windsor including: creating a National Resource Center on Aging; passing non-discrimination rulings for hospital and nursing home visitation; and passing non-discrimination rules for employment and HHS contractors. Now that DOMA ruling came out they bumped up the work on this, asking every agency to review their policies to ensure LGBT family inclusion. For example, HHS has now broadly adopted the “Celebration Policy” that IRS put out. This policy makes it standard for HHS to recognize legally married LGBT couples, even if they live in a state where the state doesn’t (yet) recognize them.

We know that LGBT people have a long history of access to health care barriers and that one in three low income LGBT people is uninsured. That’s why taking advantage of this historic open enrollment period for insurance exchanges is so critical for us. Secretary Sebelius pushed us to please do everything possible to help encourage people to enroll before the March 31st deadline. I agree, it’s why CenterLink’s Network for LGBT Health Equity has just put out more social-media ready ads for people to share. Please share them and visit Out2Enroll for more ideas.

Before the secretary left our designee, the ever-quick Harper Jean Tobin, was able to highlight a few of our consensus of top issues from our call. Our top ask was for a clear prohibition on overt discrimination in health care. Then we wanted LGBT cultural competence trainings for all providers; more clarity on acceptable practices in the insurance marketplace (there’s some HIV and trans exclusion hijinks going down in some states); quick action once the Medicare transgender ruling comes down; better measures for and more data collection on trans people; more research on many topics; and smart attention to legacy planning as we inch nearer an administration change.

Then it came time for the Chairs of the HHS LGBT Issues Coordinating Committee to hear our individual priorities. The meeting ran long as we all got our 90 seconds to chime in. This list really covered most everything anyone could think of, it’s a testament again to the depth of our joint work on health that there’s activity on so many fronts.

What were my top priorities for the administration in the coming year?

First, tobacco. We’ve developed a great depth of HIV work in part because the feds prioritize it, as they should. Considering tobacco is our top health burden by far, we need the feds to use that model to do more to prioritize LGBT tobacco. The fact that since 1988 NIH has only funded nine studies on LGBT tobacco use and only a handful more on cancer is a shame and the first area to fix.

Second, data. The feds may be pleased with more trans data collection on state surveys, but they’re spreading a measure that is only tuned to LGB across the federal surveys — including replacing a trans inclusive question on the smoking survey with this new LGB question. So we need them to start spreading trans data collection across federal surveys too, not just the states’ surveys.

Third, legacy planning. It’s a sad truth that our health integration is dependent on politics, but until science rules the day, we have to brace ourselves for internal discrimination after an administration change. One of the most powerful things HHS can do to help preserve progress is to finally declare LGBT people a legally designated health disparity population. There’s ample evidence to support the move and once it’s done you’ll see LGBT listed alongside other disparity populations on funding announcements across HHS, regardless of who’s in the Executive branch.

That’s the report! It was a vibrant meeting, I look forward to seeing how HHS turns LGBT health priorities into an action plan for the coming year. 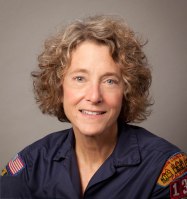 Most of the time I have to force people to listen to my opinions on what would fix the cancer health disparities in the LGBT community. So, imagine my delight in being invited to speak my mind to high up officials at The Department of Health and Human Services in Washington DC.  It was worth rising early and dressing nicely, two things I usually grouse about.  I prepared remarks that would best represent the values of CenterLink’s Network for LGBT Health Equity and the National LGBT Cancer Network.

In addition to HHS Secretary, Kathleen Sebelius, the head of the table also held Cathy Greenlee, Ken Choe and Howard Koh, the co-chairs of the LGBT Coordinating Commitee at HHS.  Around the other three sides were representatives of about 20 LGBT health organizations, including GLAMA’s Hector Vargas, HRC’s Shane Snowdon, Fenway’s Sean Cahill and, of course, Scout.  We listened attentively to the Secretary’s report of LGBT accomplishments and wishes, and then we went around the room and said what mattered to us and the people our organizations serve.

I said, “My organization addresses LGBT health disparities across the Cancer continuum, but today I want to focus on survivorship.  We conducted a national survey of LGBT cancer survivors and the level of discrimination they reported in their cancer treatment was shocking and disturbing. Some changed doctors, but many could not, either because their health insurance didn’t allow it or because there were no other treatment options where they lived.  Some people went back into the closet during treatment, fearing that discrimination could compromise their treatment from a life threatening illness.  Some transgender people were denied their hormones while they were in the hospital.  This is terrible because we know for sure  that one’s experience of healthcare has a profound impact on recovery and health.

We need research on LGBT cancer and it needs to be funded by PCORI and NCI.  My quick search found only 13 funded studies!  And another mere 25 studies on tobacco, even as we know that tobacco is the largest preventable cause of cancer!

And one more request: while research shows that LGBT people use tobacco at rates that are 68% higher than the national average, without including gender identity and sexual orientation in the SEER data, we can’t say with certainty that we have even one more case of lung cancer in LGBT people.”

I sat back in my chair. And gave the floor to Scout. 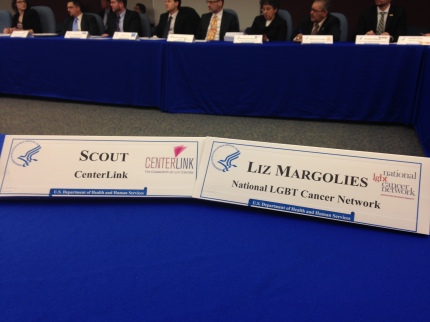 The Network is pleased to inform you all of the White House LGBT Conference on Health.

The Event will take place in Philadelphia February 16, 2012. We encourage you to attend if you are able. Scout will be attending on behalf of the Network so if you are planning on attending let us know so we can link you all together. Make sure you RSVP early as space is limited.

Hosted by the White House and the U.S. Department of Health & Human Services

in partnership with Mazzoni Center