Stay tuned, Institute over but more posts to come

It’s been a busy week with posting to the blog, but stay tuned, it’s not done. We still have a few more posts to finalize about lessons from the Tobacco & Diabetes Training Institute 2010, and today our team splits forces to head into 2 more meetings, I’ll be up in DC meeting with Secretary Sebelius and members of the new HHS Task Force on LGBT Health, while Gustavo and Emilia stay in Atlanta to attend the all-day tobacco disparity network planning day. So stay tuned for blogs on all. 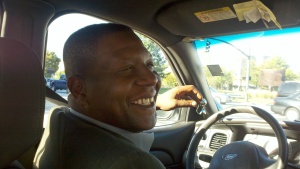 How did it start? I jumped into the cab to race to the airport and I think my cabbie warned me about his New York style driving but next thing you know he’s launching on a world class high volume rant about how we’re messing up health in this country. Crazy part was, he’s like a policy savant, nailing every single problem us fancy wellness folk are trying to prioritize.

Eldin on city planning for health

“Now New York has it right, in NY you can walk everywhere. Now look at Atlanta downtown, go down after dark, do you see anything? No! And it’s dangerous. They need to build more stores in those big buildings, so people can have something to walk to at night.” Right on Eldin. “And look at it here.” We’re zipping through Atlanta sprawl-lands. “Those people can’t go anywhere without their car. They can’t even walk anywhere at all. Now in New York, you can walk for hours. And do you wanna know how many different juristictions we just went through? Four. All of those places have to agree to do anything new.”

“And what about bicycles? We’re driving through a park right now, you see any people biking or even walking? You used to use your bicycle to go places, but now you have to put it in your car before you can get anywhere safe to bike, and then we don’t, we just don’t even use our parks. Now think if you were in New York City now, how many joggers would you see in Central Park?” I admit, plenty. “Yah, we don’t even use our parks here, it’s such a shame.”

“And look around you, have we passed any grocery stores at all?” No sir. “You see, where are you supposed to even get vegetables. Yet you wanna know what’s one block that way? Lines of fast food restaurants all the way into Atlanta. What is that stuff? It’s all fried. There’s no vegetables in it. People don’t even know to eat them any more. That’s why we’re all fat. Now back in Haiti when I was a boy, whenever my mama was pregnant, my grandma would be cooking spinach and greens for months because that made your blood strong. But here, where do you even find them?”

I tell Eldin one of the tidbits I learned at the training, that part of the aid we sent to Haita after the quake included cigarettes.  He’s incensed, “Like they can eat that? I mean people are going to do what they’re going to do, but we’re growing enough tobacco there already. We used to grow lots of our own food, now other countries keep teaching us how to get rid of our farms and buy things from companies instead. But none of it is healthier!”

“This country is messed up!”

“And it’s going to take a long time to fix!” Eldin finishes with a flourish. He’s gotten all worked up and I sigh thinking, yup, it’s going to take a lot of time to make it simpler for people stuck in the car wilds of Atlanta sprawl to have easy access to routine exercise. Back in my doctoral program I remember wondering why the World Health Organization had Transportation as one of their top 10 social determinants of health, now that link is becoming crystal clear. (I’m not even counting how naïve me thought their listing of Food as another major determinant of health was mostly about famine, not feasting. Ha!)

But change is afoot from top to bottom here. The passing of health care reform, also known as ACA or Affordable Care Act is setting some big pieces in motion to focus on wellness and prevention nationally. A large step is the creation of a new Prevention Council filled with cabinet members from all over government. And no, it’s not just filled with people from Health and Human Services, but with the head of the EPA, Dept of Transportation, Dept of Agriculture, etc. Folk realize we need changes at all these levels to clear the path to make it easy to be healthy in our country. Nicely, in the first report of this council, they are also naming sexual orientation (crossing fingers for gender identity soon) as a disparity population! So, I’m looking forward to this new top level coordination to change systems and the from-the-getgo inclusion of LGBTs. I know they’re putting together an attached community advisory council, I sure hope we have LGBT health experts on it. And I think we should have Eldin too!