Jazz Jennings Has Something to Say

LGBT HealthLink interviewed teen superstar Jazz Jennings on how she got involved with Truth Initiative’s anti-tobacco campaign for LGBT youth. Jennings said that lack of support from family and others, as well as targeted marketing from Big Tobacco, might explain why LGBT youth are nearly twice as likely to use tobacco products as their peers. Way to go, Jazz!

A study evaluated the CDC’s Testing Makes Us Stronger campaign, which promoted HIV testing among Black men who have sex with men (MSM), and found that 43.2% of study participants had been exposed to the campaign, many at pride events or in a doctor’s office. Those who had seen the campaign had a 38% higher probability of having been tested within six months.

Researchers developed a simulation for medical residents in which they treated a “patient” played by a transgender actress. Only 61% directly asked about gender identity, and an equal number made the patient feel comfortable. However, overall communication skills were better, suggesting good communication could bridge doctors’ knowledge gaps on transgender health. 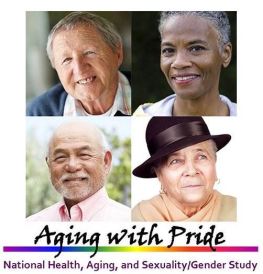 NBC News reported that people of color currently comprise 20% of the LGBT older adult population (which includes 1.1 million people over the age of 65), but that that number will likely double in the next three decades. These individuals face intersectional discrimination and disparities, and have complex socioeconomic and health needs as a result.

How the SDGs Can Include LGBT

The Global Forum on MSM & HIV, along with OutRight Action International, launched a new report on how the needs of LGBT folks must be considered as the UN and countries worldwide implement the Sustainable Development Goals by 2030. Their recommendations included ending discrimination, collecting and using LGBT-specific data, and training providers on LGBT health.

Researchers published a review of how laboratories can contribute to quality care for transgender patients. While labs often need to know the sex recorded at birth of their patients, understanding gender identity and a patient’s medical transition is also important. Researchers also identified barriers to quality, inclusive care in both patient-facing and interior aspects of labs.