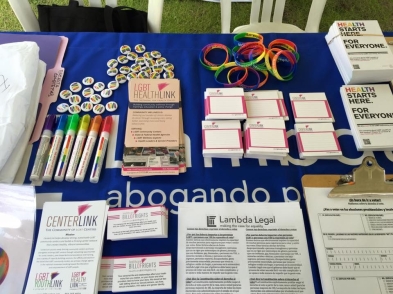 A year ago, LGBT HealthLink provided free Pride materials to many LGBT non-profit organizations and to CenterLink’s member centers. The rainbow #TobaccoFreeQueers wristbands and #GetScreened sunscreen arrived just as the massacre in Orlando happened and stunned the world. Pride events everywhere continued and brought an already tight community even closer.

LGBT HealthLink wanted to be sure to share this blog sent to us by one of our favorite guest bloggers, Lissette Rodriguez, a Health Educator and an active member of the Citizens Alliance Pro LGBTTA Health of Puerto Rico www.saludlgbtta.org. 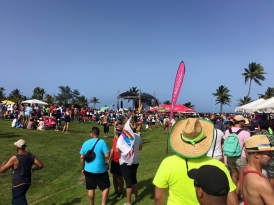 This is the 3rd year that Puerto Rico Citizen’s Alliance for LGBTTA Health worked in collaboration with Lambda Legal and the LGBT HealthLink at this Pride. We feel thankful for the contribution and all the materials that we were given to distribute at Pride.

The ACPS-LGBTTA engaged an estimated 150-200 attendees that came to the table. The march attracted thousands of people but not all stayed for the festival at the end. The demographics of attendees included a mix of youth, adults, and seniors from the entire LGBTTIQ spectrum, families and allies. 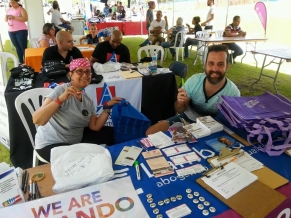 This year’s task engaged Pride attendees with a survey regarding the November presidential election. The question “do you plan on voting in this year’s presidential and local election?” was asked to those who approached the booth. Most of the responses indicated a high interest in voting during the upcoming local Puerto Rico Governor and Legislature elections.

Puerto Ricans living on the island are not allowed to vote in the US Presidential elections because of the territorial status of the island. However, about half a dozen participants expressed that they will vote as US mainland residents.

We still had some daunting shadow on many marching in the LGBT Pride parade due to the violence and shooting in Orlando, but we need to keep showing our Pride for our brothers and sisters. 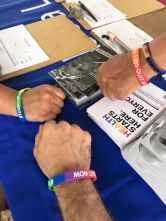 The ACPS-LGBTTA recognizes Pride events in Puerto Rico as essential for the local LGBTQ community to learn their rights, receive resources to improve their health, and take direct action. With the commercialization of Pride around the country, the participation of non-profits like Lambda, LGBT HealthLink and the ACPS-LGBTTA are keys to the mission of these events.