Each week LGBT HealthLink, a Program of CenterLink, and researcher and blogger Corey Prachniak, bring you a round up of some of the biggest LGBT wellness stories from the past seven days. For more LGBT Wellness, visit a page dedicated to the topic here.

Buzzfeed reported that a breast cancer organization in Australia is launching an ad campaign to encourage at-risk queer folks to get screened. Citing the fact that LGBT individuals are less likely to meet mammography guidelines, the campaign’s organizers hope it will help close the gap. Did we mention the photos are flawless?

A study found that youth in correctional facilities were disproportionately sexual minorities, especially among girls, of whom 39.4% identified as LGB and another 18.5% identified as “mostly straight.” Additionally, gay and bisexual boys faced more than 10 times the odds of experiencing sexual victimization while in custody as compared to heterosexual boys.

Researchers attending Black Gay Pride Events found that just 4.6% of African American men who have sex with men and transgender women were on PrEP, the HIV prevention drug. Also troubling: just 39% of participants were even aware of PrEP. Being in a relationship, having recently been tested for HIV, and being out were all associated with being aware of PrEP. 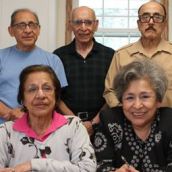 The Gerontologist released a supplemental issue on LGBT aging. One article on intersectional disparities found that African American and Hispanic older adults faced many issues (like lower income and social support) that reduced health-related quality of life. However, these groups had higher spirituality, which was associated with an increase in psychological health.

Cooking Up Solutions in Cancer Survivorship

STAT recently covered a topic in cancer care that’s rarely discussed – how individuals can lose their sense of taste during cancer treatment and have trouble eating as a result – as well as what creative chefs are doing about it. Research has shown that LGBT cancer survivors already report lower satisfaction with care, meaning this kitchen-based research could benefit the community.

Become a member and get access to a community of folks working on LGBT health equity issues. Join here!