As part of last fall’s National Black Justice Coalition Conference, “Out on the Hill”, I attended a White House meeting on Gay and Bisexual Men and HIV/AIDS.  I came away from the meeting impressed by the level of concern that the White House and other partners in the fight to eradicate HIV/AID are consistently demonstrating.

We’re 30 years into the HIV/AIDS epidemic but according to a report released by the Kaiser Family Foundation (KFF), infections among gay and bisexual men are on the rise in the U.S, especially for men of color. 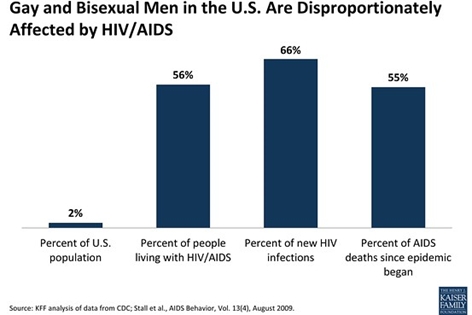 As a bisexual community expert I think it’s essential to educate folks to the fact that bisexuals have always been at the forefront of the fight to prevent HIV infection. Even if many times history erased us. Since the very beginning of the HIV/AIDS epidemic, the bi community helped shape the messaging, support opportunities and intervention models pertaining to ending HIV/AIDS.

Many times bi efforts were slighted, invalidated, forgotten or in some cases erased. And as Dr. Herukhuti, Black bisexual theorist, so eloquently once put it, “bisexual erasure is psychic murder”. Nowhere is this more dangerous than in the arena of public health, where bisexual populations are often erased in favor of a few more convenient fictions:

“Bisexuals become the disappeared of the movement. Nowhere is the impact of this dynamic felt more viscerally than in black and brown communities. Historically, HIV research and prevention has had a problematic relationship with bisexuality in black communities, fluctuating from demonizing black bisexual men as vectors of HIV transmission to treating us as if we are exactly like black gay men — lumping us into a single box of men who have sex with men along with them. It is, therefore, no wonder that HIV rates are disproportionately higher in black communities.”

It’s no wonder then that gay history runs parallel to the history of biphobia, and its legacy, bisexual erasure. If bisexual historical figures and bisexual figures aren’t “bisexually erased” into being gay men or lesbians, they are removed from the conversation, even if their data isn’t!

For example, in 1985 when Larry Kramer first published his seminal work on the HIV/AIDS epidemic “The Normal Heart”, the only mention of bisexuals is in the stage directions. In the play’s “About the Production” section, Kramer describes the walls of the set being whitewashed and painted in “black, simple lettering” with “facts and figures and names”. One of the items on set walls?

If gay+bisexual=gay, where does the bisexual go? Contrary to popular belief, we do not disappear in a puff of logic. We just die, and sometimes we die without anyone to remember our name.

To me this feels like vexation without representation, and bisexuals get nothing for their troubles. And troubles they are, with bisexuals facing higher rates of nearly every societal ill such as alcohol, drug abuse, smoking, cancer, sexual violence (including rape, stalking and intimate partner violence), heart disease, suicide and PTSD.

Bisexual oriented AND bisexually behaviorally people simply report more disparities than their gay, lesbian and heterosexual peers. In comparison to some research on transgender individuals, bisexuals report less hate crimes yet nearly the same rates of suicide and sexual assault.

Winning the disparity race has left bisexuals with nothing but shame, often internalized and externalized about our identity. Whether it be damaging oppositional dialogue about bisexual community labels or consistent calls for “visibility” instead of straight up parity, bisexuals have paid the price.

An evolving world is waking up to recognize that binaries are too simple to define love, and that bisexuals need more than just to be named. We need to be served like our lives depend on it and our sanity requires it. Will the world wake in time?

To learn more about the bisexual community and HIV/AIDS, please check out The Bisexual History of HIV/AIDS, in photos.

Faith Cheltenham activist/writer/speaker There are so many different aspects of Faith Cheltenham’s life and career––writer, community organizer, advocate, activist, lecturer, poet, social media expert, digital strategist––that she is currently working to develop a single unifying “theory of Faith.” (It might be easier if you keep in mind Faith lives with hyperthymesia, or the inability to forget her own memories.) Then you too might be able to “keep thefayth” and learn to live in a future where gender and sexuality quite easily bend and every single Black life matters. Faith got her start in LGBT advocacy as a Human Rights Campaign intern on the Gore 2000 campaign, and in 2002, she co-founded UCLA’s BlaQue for LGBT/SGL students of African descent. In 2006, she appeared in the Emmy winning reality series on race in America, “Black. White.” produced by Ice Cube. After spending time working in corporate America doing digital strategy for Sarah Ferguson, the Duchess of York and co-creating and launching tor.com for Macmillan Books, she began to focus full-time on bisexual advocacy. In 2012, she was named one of The Advocate’s "Forty Under 40" and was appointed to the University of California's LGBT Task Force. In 2013, Faith was the Co-organizer of the first Bisexual Community Issues Roundtable at the White House & in 2014, was honored to be a stage participant alongside President Obama as he signed the Executive Order protecting LGBT employees of federal contractors from discrimination. Between 2015 and 2016, Faith co-organized four bi community meetings with the Obama White House including the first livestreamed Bisexual Community Briefing at the White House in 2016. Every year, together with GLAAD, BiNet USA co-sponsors Bisexual Awareness Week (#biweek), a social media experience seen by millions that Faith co-created in 2014. As a lecturer, Faith has spoken at locations as varied as San Diego Comic Con, Netroots Nation, Case Western University, UCLA & Yale University, on topics like the histories of pre-colonial African sexuality and bisexual intersectionality. An award winning journalist and writer who has had her poetry featured on Genius, Faith won her first writing acknowledgment from Parade Magazine for her musings on the racism she experienced as a Black Star Wars cosplaying kid in her native San Luis Obispo, California. Faith has been published widely in Washington Blade, South Florida Gay News, Advocate, Huffington Post, and her personal blog, thefayth.net. She has also been featured in various publications and outlets, including CNN’s Headline News, LA Times and New York Magazine. Faith identifies herself as a “Black bisexual intersex queer woman of color who came up transracial.” She is the proud parent of a gender expansive child, Storm (age five) with her husband Matt Kanninen, an Android developer working at Facebook. View more posts