As I came across the DREAM ACT 101 presentation, I ventured in to a full room jam-packed with an assorted variety of participant of all color, including among the mist, some undocumented queer youth.

The title of the workshop “Undocumented and Unafraid, Queer and Unashamed”  , explained with full detail the tactics and mobilizing that (by no coincidence) queer undocumented youth took part on the immigrant youth movement after the DREAM ACT failed to pass in 2009/2010.

Two years from now, the parallels that exist within the LGBTQ/Immigrant struggles continue to be for some  a little hard to understand.  This particular workshop caught my attention since it was mostly driven by woman, something you don’t see every day and is very powerful for me to witness.

Imelda Placencia and Seleny Rodriguez, both undocumented queer woman organizing   The CIRCLE Project, then showed the audience another perspective that is tabooed even amongst communities of color in the whole. That is why projects and spaces for self-care are really important in our communities. 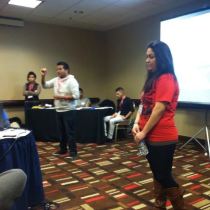 “Doing activism, even when rough policies take effect into our every-day lives as human beings have tremendous impacts in our mental health or access to services as queer immigrants in this country” fiercely stated Palencia. Not being able to find a job, accessing higher education, feeling rejected by our parents or friends for being queer or being undocumented sometimes lead to depression, substance use or isolation.

Marco Quiroga, born in Peru and brought here at age 2, explains a little bit oh how immigration policy has affected his life as a young undocumented gay male living in FLorida.

Javier Hernandez, a fierce undocuqueer from the Inland Empire Immigrant Youth Coalition continued to speak truth to the audience, as some tears rolled down in anxiety of the reality to recant these particular cases in which the lack of papers, or not being able to succeed fully in this country has taken the lives of many innocent people that don’t discriminate necessarily your potential as an immigrant.

“That is the Case of  Joaquin Luna, A DREAM ACT Eligible youth that after the DREAM ACT failed to pass, and suffering from depression, decided to take his life away and committed suicide in 2010”.

In Georgia, the harsh anti-immigrant and dehumanizing law HB87  has Impacted  Irving Xochitla, a young undocumented DREAMer that was denied medication and forced to be kicked out of a hospital with peritoneal dialysis. The project “UndocuHealth” currently serves and mobilizes these struggle within our own immigrant communities.

The intersectionalities that the broken immigration system  affects to millions of immigrant families that have no legal status in this country is definitely not just of legal status matters, the detrimental damages in which the government has impacted anti-immigrant programs and massive incarceration for profit in detention centers , should definitely be a priority for both LGBTQ and immigrant communities.

Our Latino queer community needs to have more access to mental health and social services in order to truly bring equality to our communities. Immigration raids, separation of families, massive deportations and dehumanization need to stop Now!

I’m excited to see what other workshops bring up to the light mental health equity to those in our LGBTQ communities that have no access to these types of services or spaces.

View all posts by thealexaldana