For the first time in 24 years, the National Conference on LGBT Equality Creating Change will be having its first Latino  Institute on Thursday, January 24th, 2013. The day-long institute’s most demanded topic by national organizers will be to discuss the next steps within the Latino LGBTQ community and Immigration and how we can best strategize efforts to bring justice and dignity to both of our communities.

I cannot help but to feel enthralled to meet amazing familia that is dedicated to serve the latino LGBTQ community at a national level and that have made it possible for me to be part of these conversations.

The real excitement however, comes from the community, from the land in the south.Two years ago I had the fear of traveling even within my own community. After Liberating that fear by coming out of the shadows about my legal status, I decided to deport such fear and make it into self-empowerment to mobilize power to the people.

The chills I get on realizing the community in which the conference will be taking place is Georgia, one of the worst  anti-immigrant states in the country ,in which many families had been separated, young undocumented students don’t have rights to go to school, and looking brown on the streets, adds another burden to your identity as a queer person.

That is why, our opening ceremony will be joined by some of the bravest radical DREAMers in Georgia that have made a difference to many families.

“Dulce Guerrero, among 2 other queer undocumented youth will be representing the community of Georgia and the National Immigrant Youth Alliance/ Dream Activist GA which has helped prevent many deportations and has fiercely empowered those who continue to resist HB 87 locally ,and the current separation of families that has reached millions of deportations with programs such as Secure Communities and 287g nation-wide”. 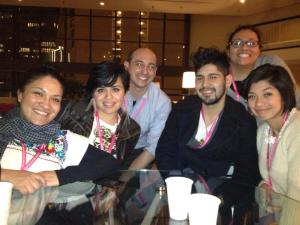 Georgia Dreamers will encourage anyone attending the Institute to helps us build a “Community Altar” with offerings, blessings, pictures, banners and other items that represent your State, Country or Territory. In short, The work that drives you to be part of creating change, the community you serve, present in a visual way.

Participants will be welcomed to simply join the opening ceremony to be part of the circle, which will be blessed with good intentions to follow up with an intense agenda full of energies. The Institute welcomes all types of religious backgrounds and beliefs.

I’m so humbled to be part of this dialogue with the Institute, because equality to me goes beyond false borders and hate in our communities, because It is important for us to speak for our selves and not allow political figures to decide for our future existence in this country.
The complexity of struggle in our queer communities of color goes beyond Marriage Equality, it is about dignity and respect as human beings.

The Altar will be present throughout the day to remind us that even though we might come from different places or have different opinion, migrations continues to open those borders for us to work together as freely as they did hundreds of years ago, continuing to preserve proudly our culture and our roots, so we can build together a better future.