I’m packing my bags today and getting excited because tomorrow I’m an invited speaker to the Southwest American Indian Rainbow Gathering.

Great job to one of our newer Steering Committee members, Ms. Trudie Jackson, for being the Chair of the event. We know from our work with the American Indian tobacco control networks that creating events across tribes can really be an extraordinary challenge. Hat’s off to you Trudie!

Here’s the event press release, feel free to spread, or come out and say hi tomorrow if you’re in Phoenix.

2 at Phoenix College located at 1202 W Thomas Road in Phoenix. The Gathering presents keynote speakers and provides community resource and benefit services. It also facilitates current medical and mental health updates and networking opportunities with Healthcare providers and community organizations in the Southwest serving the Native American LGBTQ community. Second day events on October 20 from 9am to 2pm include Youth focused presentations on topics that target the LGBTQ Youth and end with a Native American LGTBQ Youth Panel.

Hosted by a collaboration of community organizations and mental health providers serving the Native American communities in the Southwest, the collaboration in partnership with Aunt Rita’s Foundation are offering a variety of events free of charge to individuals invested in the empowerment and welfare of the LGBTQ Native American community. Keynote speakers will be inclusive in a series of events over three days that will conclude with AIDS Walk Phoenix 2012. Topics range from HIV/AIDS and medical health support to mental health awareness, suicide prevention and LGBT specific issues.

Suicide is a crisis that touches everyone from all backgrounds and has become a great concern for the LGBT community. According to the Center of Disease Control, suicide is the third leading cause of death in the United States. In addition, LGBT youth are 2 to 3 times more likely to attempt suicide than their heterosexual peers.

AIDS Walk Phoenix & 5K Run, an Aunt Rita’s Foundation event, has been steadily increasing in visibility and in funding raised since its reintroduction in 2008. Infection rates are on the rise, and our communities, especially the Latino and African American community, have experienced alarming increases in the number of people testing positive for HIV. More people need care than ever before, but federal and private funding for medical care and supportive services continues to decline. The lack of HIV education and awareness throughout our community only makes the number of new HIV cases increase. This year at AIDS Walk Phoenix & 5K Run the walkers, runners, pets, and teams are working to exceed the goal for 2012 and raise over $500,000 for 20 member agencies. All individuals can join any of the AIDS Walk teams, create their own team or join the many Native American teams that are associated with this event. 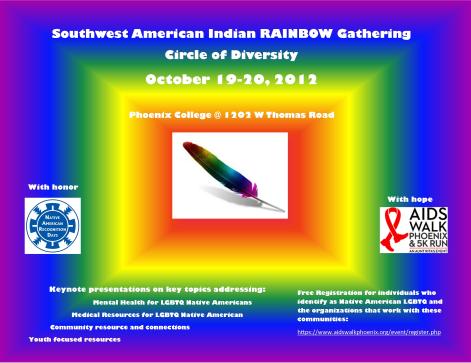 Trudie Jackson, Chair of the Southwest American Indian RAINBOW Gathering says “this valuable opportunity to connect with the Native American LGBTQ community and honor Native American Recognition Days is vital to the health and welfare of the community as a whole”

RJ Shannon, Community Chair of AIDS Walk Phoenix 2012 states “Any opportunity that allows us to support Native brothers and sisters to address health disparities is a moral imperative”