March has been yet another busy month for the Network. We are pleased to announce the launch of two major projects from the Network. First, Joseph Lee of our Steering Committee is helping us launch MPOWERED best and promising

practices review, an effort to collect lessons learned in the field of LGBT Tobacco Control. The final document will be launched at our Summit, the 8th National LGBT Health Equity Summit, in Kansas City this August. Second, at long last the Network is pleased to announce the launch of our new website www.lgbthealthequity.org. Although we are still working on the last small details, we are very pleased to have this new resource up and running for the field.

Our staff was active this month in a few different events. First, Scout attended the FDA Research Summit. At it we got one win from a prior action alert – FDA agreed to collect at least LGB (not yet T) data on their new historic NIH tobacco research project. He recaps the important aspects of the summit here: FDA Tobacco Research Meeting – Upshot & Action Needed Now!

He also attended the TAPP-INTO convening of state disparity networks in Minnesota (we have a long term contract to provide tech assist to these networks). See one of the key lessons from their sustainability training here: What do funders want? Gustavo was also out training, he presented on making practices welcoming to LGBT patients at the first ever Sharing Best Practices in GLBT Health training sponsored by the Sylvie Ratelle Prevention and Training Center of Massachusetts Department of Public Health. Most recently, staff attended the FDA Tobacco Policy Center disparities listening session hosted by our friends at Legacy, with the sister tobacco control networks and partners across the country. The next day, Legacy convened the disparity groups to strategize together. Watch to see us roll out more coordinated menthol advocacy in the near future, and read about the other policy priorities here: Disparity Networks Plus.

There have been some major events this month that the Network has been promoting. First, partnering with our friends at Shift MN, we celebrated Kick Butts Day. We had two great posts from MN Youth from Shift MN showcased posts on our blog; Dangerous Swagger and Breathe… Standing Up Against Corporate Tobacco. The Network has also helped promote the Coalition’s Health Awareness Week. Most notably, we have helped spread the news on two major tobacco events: the rollout of the first national tobacco education campaign and the release of the Surgeon General’s Report on youth smoking. Also this month, the Network campaigned to help one of our bloggers, e.shor, run for and ultimately win a scholarship to Netroots Nation. The network also highlighted some world tobacco news, as Brazil announced the ban of flavored cigarettes including menthol. According to a report from the National LGBTQ Youth Adult Tobacco Project, 71% 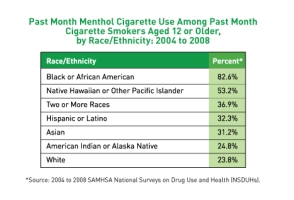 of LGBT youth who smoke cigarettes smoke mentholated cigarettes. If FDA stepped up and also banned menthol in the U.S. it is likely the single most important action that could be taken to deter youth smoking. Also, we continue to highlight local projects, like this one on David Mariner’s tobacco and HIV project, and provide policy insight on our blog, like with our post on LGBT funding announcements and our heads up on things we expect to see soon from HHS.

We are very pleased to report that one of the requests we made with our Puerto Rico allies in January’s Department of Justice meetings has already come about, FBI and DOJ officials have been deployed to Puerto Rico to conduct additional listening sessions with community members with a promise of official trainings to follow. Read more about it here.

In other notes, we also got the news our PCORI application submitted a few months ago did not get funded and we are currently seeking nominations for two new Steering Committee members. Also catch our nice rundown of last year’s accomplishments here: Highlights of Network Accomplishments Over Past Year.

Finally, you know we blog a lot, and perhaps you’ve noticed we’re also trying to get more media attention to LGBT tobacco and wellness issues. We’re happy to announce a great outgrowth of both of those efforts; Scout has become an official Huffington Post blogger! Read his first two pieces New ‘Additional Feature’ for Health Insurance Finder: Same-Sex Coverage & White House Creates a Watershed Moment for LGBT Health and be sure to watch for more.

View all posts by gyour1mainman